Of all of the perennial plants in the garden, growing a lush, green lawn has been the most challenging over the years.  When my grandfather was alive, maintaining the perfect lawn was his obsession.  The entire yard consisted of a moderate sized vegetable garden and the greenest, weed-free lawn in the neighborhood, if not the entire City of Nashua.

As the years have gone by, the lush lawn has evolved into large perennial gardens of local plants and flowers, most of them drought and deer resistant. However, there are two areas of the backyard with grass — each about the size of a putting green.  The paths through the gardens wind around these patches of lawn.

After the removal of an old, dying cherry tree about 7 years ago, the grass just wasn’t doing well while the tree’s roots rotted. As a result it was replaced with fresh loam and sod (about 6 years ago).

It looked beautiful, but without an irrigation system, it required a lot of water. Yes, so much water that that the first water bill of that summer was outrageously obscene. Thankfully, the investment resulted in lush, beautiful grass until the oak tree abutting my property that gave nice shade was removed last summer.

Like the cherry removed a few years earlier, it was a dying, large, old tree. It was dropping 10+ foot branches and was a hazard to the neighbor’s home and the fence on our property line. The tree became more of a concern after the dangerous, late October storms 2 years in a row – the Halloween Snowstorm and Hurricane Sandy.

The removal of the oak in the late spring of 2013 dramatically changed the sunlight across the entire garden. Overall, the evolution to a full sun area was good (actually great!) for the majority of the garden.

Except for the sod.

A Sad Sod Situation (with apologies to Sir Elton John!)

Over the past two summers, the soft, lush, green lawn turned into a brown, crunchy mess (the only green to survive consisted of weeds, which actually did very well this past summer.)  Oh, yes, it was the sun scorching the grass, but also the fact that I over fertilized in the fall of 2013 added an extra ingredient for disaster.  This is my best of life experience example that supports the idiom that “Too much of a good thing can be bad.” 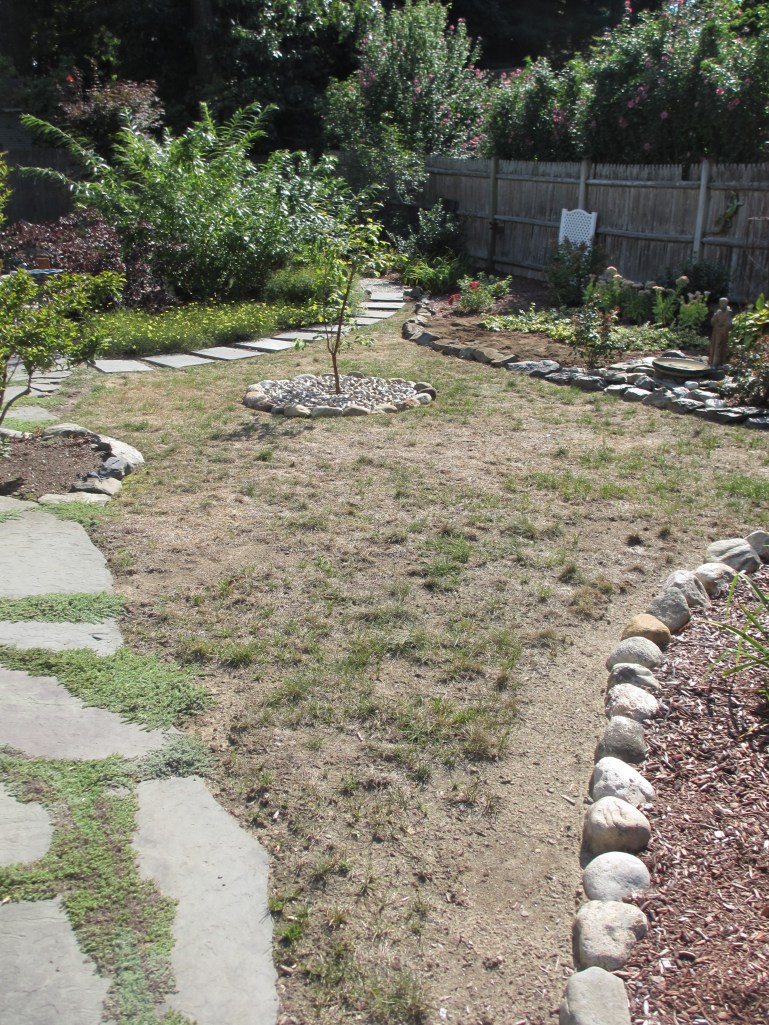 After some research and a little desperation (for a few days, I considered buying that “As Seen on TV” product called Hydro Mousse!), the reality hit that the dead sod needed to just be removed and a new lawn had to be planted.  Timing was perfect for this late August decision because fall is the best time to plant a lawn and focus on caring for grass.

Hope is on the Way

On September 4, a landscaper started the project. In an hour, he and his crew removed what was left of the old, dead sod. On September 5, he stopped by for another hour and spread fresh, new loam.  Then, on the morning of September 6, the Tall Fescue grass seed was planted. He actually planted 2 layers of it.

Within a week, little tints of green stated to appear.  Within 2 weeks, the areas of new grass started to show real life.  At 3 weeks, it was time to a quick mow! September was cool but dry in Nashua, so the new grass was watered 2x a day for 3 weeks. (The September water bill has not yet arrived!)

Finally…..It’s Good to Touch the Green, Green Grass of Home

Today, marks week 4.  I’m just amazed at the transformation that has occurred in 28 days. 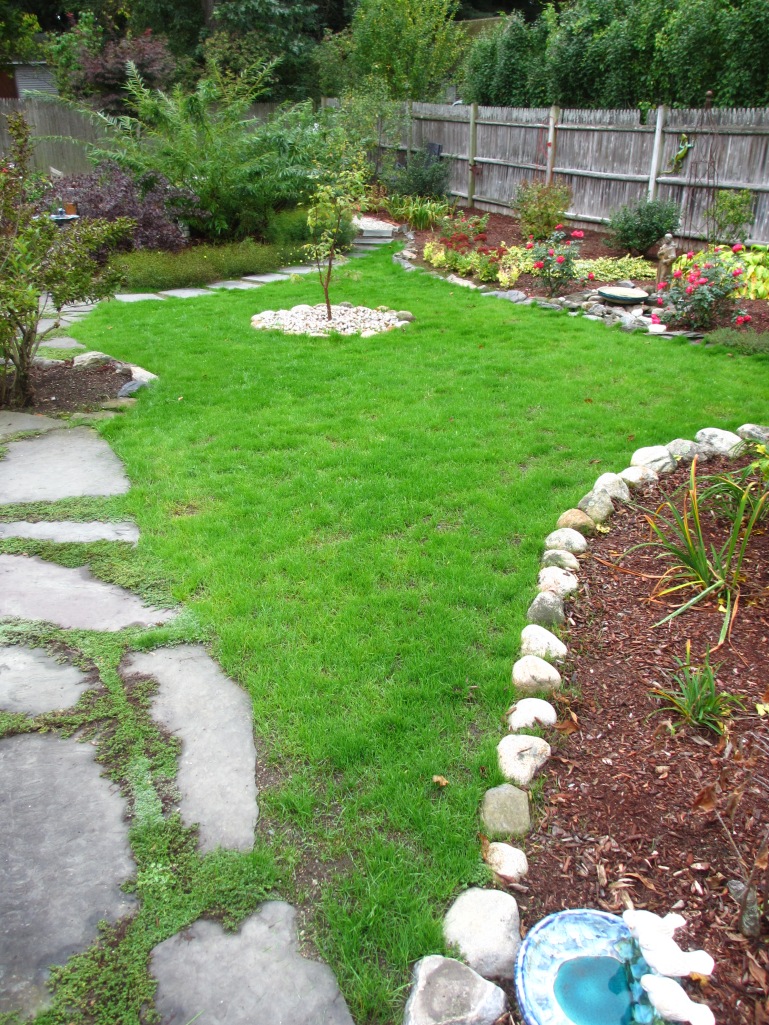 There are still some small open patches that will be tended to in the spring, but the grass is once again soft, lush, and green.

It’s the kind of lawn that makes you want to kick off your shoes and walk barefoot across. Exactly like you’d expect of the green, green grass of home.

4 thoughts on “28 Day Transformation of a Sad Sod Situation”

This site uses Akismet to reduce spam. Learn how your comment data is processed.