Time spent in the garden is absolutely soul-saving right now.

The truth is – quiet time in the garden is always shared with whatever Mother Nature decides to offer during any given moment on any given day. In recent weeks, we’ve had so many songbirds visit. There’s no need for music in the garden now because the bird orchestra has center stage.

The resident mocking bird starts the sunrise chorus as he calls for his mate each morning (earlier and early each day, in fact!). We also have the American Robins, Cedar Waxwings, Black Capped Chickadees, American Golden Finches, as well as the Red Winged Blackbirds, Mourning Doves, and of course a variety of sparrows.

And this year – – – we have the BLUES. The Eastern Bluebirds — the kind of blues that bring happiness and optimism.

I’ve become obsessed with these magical creatures. I thought that I’d seen them from time to time this winter while they enjoyed the holly berries outside my home office window this winter. But, honestly, I wasn’t sure they were even bluebirds since we’ve never had any nearby. On April 3, the third week our “Stay Home” order due to the Corona virus (we’re in week seven now), as I gazed out my window, I discovered a pair of bluebirds was investigating the various bird houses in my garden. None of them bluebird nest boxes, by the way.

To say this discovery was a surprise is an understatement. It’s become the biggest news coming from our garden this year – maybe this decade! About 10 years ago, I’d put out an official bluebird nesting box, along with meal worms. I even followed all the various instructions to attract them. As one of the National Wildlife Federation’s certified wildlife habitats, our garden has food (via the various native berries), water, shelter, and a place to raise their young. It was disappointing that after many years of seeking out bluebirds, the wrens and house sparrows always arrived first and took over the various nesting box and house options. After a squirrel ruined the lone bluebird box, I removed it and just appreciated ALL the other birds (cardinals, wrens, mockingbirds, hummingbirds) that instead make their homes in our garden.

Just as happiness is often elusive when you’re constantly searching for it, same goes for the beautiful bluebird. While overall home confinement because of the Covid-19 pandemic has been stressful for so many people, I’ve enjoyed the arrival of the bluebirds during this time. Having extra time to watch them through windows while inside the house and when I’m outside in the garden has been very therapeutic. Thankfully, if we must spend more time than ever at home in 2020 in New Hampshire, it’s been as the seasons changed from winter to spring.

I first spotted the bright blue male in backyard (these are my first two photos captured while leaning out of my office window). Minutes later, the female arrived – she’s also blue, but her head is grey (she’s in the photo on the right). April 3 was a cold, rainy afternoon, and this pair was exploring the area that had been raked a few days earlier, finding all the goodies an organic garden has to offer. I know many people tell us not to ‘name’ wildlife, but I just couldn’t help myself. I now call the male ‘Irving’ and the female ‘Ella’ – yes, in honor Irving Berlin’s 1926 hit song by Ella Fitzgerald – Blue Skies.

After my confirmed early April sighting, I became obsessed! I needed to brush up on my bluebird knowledge (we have the Eastern Bluebird in our region) AND hopefully capture some good photographs of these little beauties.

Bluebirds really need our help. They are one of few songbirds native to the North America and they almost became extinct in the early 1900s due to pesticides and the introduction of invasive European bird species that compete for the same nesting cavities. These competitors include House Sparrows. This is what makes the arrival of the bluebirds in my garden so surprising. While we have a wide variety of birds, for years the majority of them have been various sparrow types. They dine at the feeders I keep filled through the winter and often take over any space they think will make a good home for their offspring.

The good news is that we have reached four full weeks since the bluebirds arrived and they seem to be holding their own against the sparrows and other bird box/house interlopers. Ella chose the green house with the copper roof near the Japanese Fantail Weeping Pussy Willow after inspecting other accommodations in the area – including the older yellow house that had once been home to Carolina Wrens.

I am noticing fewer sparrows than ever this spring. I think that because our neighborhood had a lot of old trees removed last fall by the local power company. The sparrows are still here though and honestly, their hostility is the most difficult aspect of the bluebirds’ arrival. Last week was the worst of nature I’ve seen in the garden. There were vicious fights and the male bluebird was valiant in his defense of his territory.

After looking at ways to help, I put a ‘Sparrow Spooker‘ over the house that the bluebirds chose. That seems to be keeping the sparrows away. It’s simply a dowel attached to the back of the nest box that has streamers of tin foil hanging and gently brushing the roof of the box.

The bluebirds aren’t bothered by it at all – but the sparrows are… well…spooked by this homemade contraption. So that’s good news. I’m hoping that our luck of scared sparrows continues, because I’m horrified at the advice from members of the bluebird community (Kill the ‘ghost eggs’ and/or euthanize the chicks if they take over the nest!). While I understand their rationale, I still find that action hard to accept and actually implement.

Aside from putting up a the ‘Sparrow Spooker’, I’ve been letting nature just take her course in the garden. I occasionally see the bluebirds stop by the feeders – enjoying sunflower hearts and suet. (While I had plenty of suet on hand, I did splurge and purchased a few cakes with meal worms and nuts last week!) There’s a birdbath relatively close by and the bluebirds have claimed it as their own right after a late day pool party hosted by a flock of Cedar Waxwings passing through two weeks ago.

So, now that Ella and Irving have their master suite set up in our garden, we wait for the Baby Blues. I know I should check on the eggs, but I can’t because they chose a ‘house’ with a tiny back opening and I don’t want to disturb it. The good news is that Ella is in there constantly sitting on the nest. While she does that, you can often find Irving going out for a drink. (He’s also very good at delivery of takeout meals he brings back to her in the nest.)

Of all the birds I’ve seen nest on our garden, the bluebirds seem to work the hardest. They care constantly taking care of each other and their ‘home’, collecting food and chasing off predators. Based on the timing of their arrival and the assumption of when the eggs were laid based on Ella’s behavior, we expect the eggs to hatch a few days after Mother’s Day.

Given the state of the world today, where it’s even difficult to go out to shop for a Mother’s Day card or present, I think Mother Nature has out done herself by delivering the bluebirds to our garden in 2020. While I’m not counting the eggs before they hatch, I am filled with gratitude for this unexpected gift that has brought so much optimism, happiness, and hopeful anticipation during such a sad time in our world today.

“Bluebirds singing a song, nothing but bluebirds all day long.” ~Irving Berlin

It snowed again in southern New Hampshire over the weekend – about five inches of slushy, heavy snow. The wintry early April day brought a flock of seven Cedar Waxwings to the garden. When they weren’t stripping the few remaining red berries from the holly shrubs, they were huddled in the Weeping Cherry tree.

Today, it’s sunny and 60 degrees (F) at 4pm. The longer days of sunshine are quickly melting the latest – and hopefully last – blanket of snow.

While most of the paths in the garden are still white and slippery,  a swath of purple blooms caught my eye when I stepped onto my my front porch to get the mail.

Spring has arrived! The crocus are blooming — just as expected in early April.

I grabbed my camera and walked through the areas of the garden where sun melted the snow from the stone paths.  (The ground in these few areas is very soft, almost muddy, so I didn’t venture far.)

It’s always a thrill to find the crocus in bloom. While expected, it always feels like the first flowers are a miracle.

The garden still has a brown dormant winter appearance – from the decaying leaves, pine needles, and sticks that will eventually be picked up either by the birds building their spring nests or during the initial hours of our annual spring cleanup gardening day.

No matter how sleepy the garden appears under the latest blanket of snow, Mother Nature does a spectacular job of waking the flowers that typically appear in late March thru early April.  This includes the crocus and scilla.  As soon as the purple crocus start to wind down, the bright scilla open to full bloom to bring new life and spectacular streaks of blue to line the garden paths. I don’t even need a calendar to know when Easter is just two weeks away.  Seeing these two spring flowers in bloom is always the first indication that the Easter Bunny is expected very soon. (And that it’s time to pick up the ingredients to make the traditional Pickled Beet Eggs for the pending holiday.) 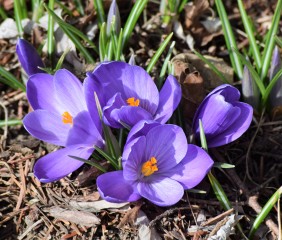 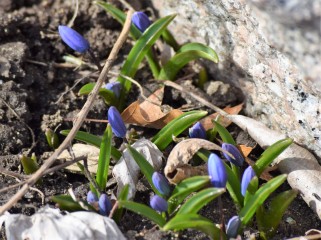 While walking through the garden this afternoon, my soul filled with gratitude. Not just the sights of pops of bright color hear and there, but with the sounds of the songbirds who are out, searching for their spring mates.

I felt caught between two seasons – winter because of the snow cover. And, spring with with the early blooming bulbs.  I’d once read a quote about crocus that included the word Grace. That seems like the perfect way to end today’s story. 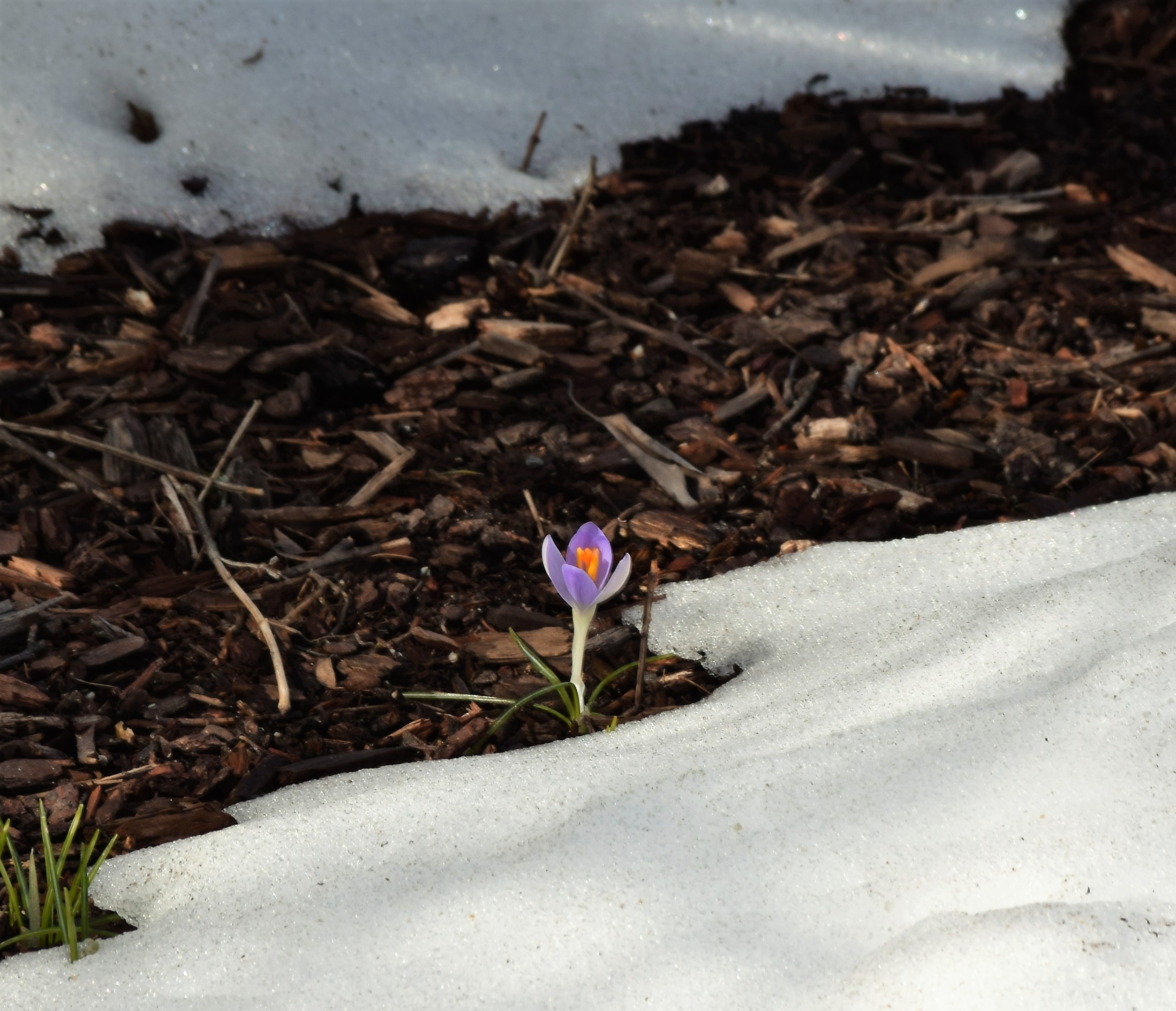 “A single crocus blossom ought to be enough to convince our heart that springtime, no matter how predictable, is somehow a gift, gratuitous, gratis, a grace.”