Long before HGTV, the only Gardening program I remember on television was ‘The Victory Garden’ on PBS.

I learned so much in the 1990s from one of the show’s early hosts, Roger Swain. I always trusted his insight about growing vegetable gardens in New England.  I also learned just as much from ‘Chef Marian’ (Morash),  who shared recipes and tips on how to prepare and cook the vegetables featured during each program. 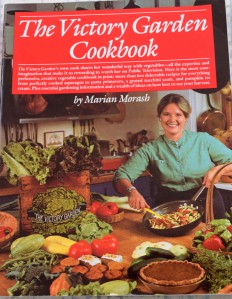 For over 20 years,  Marian Morash’s  ‘The Victory Garden Cookbook’ has been my ‘go-to’ guide for various ways to prepare fresh vegetables. It’s one of my all-time favorite cookbooks, originally published by Alfred A Knopf, Inc in 1982 and retailed for $39.95. It’s truly endured the test of time and continues to be worth the initial investment.  (By the way, this book was republished in 2010 by Knopf Publishing and can be ordered for $37.95 from my friend Dan’s indie bookstore – Water Street Books – in Exeter, NH. Tell Dan I sent you!)

I also feel the need to mention other gardening influences – since I know my mom is a regular reader of this blog. She and my grandfather will always be noted as my earliest gardening mentors. It was always amazing to me that Mom had as much – if not more – knowledge as Roger Swain — she just didn’t have a TV show to validate her expertise 25+ years ago. Today, she is THE ‘go-to’ woman among our networks of friends to identify just about any plant or flower native to New England – as well as southern Florida. I’ve learned a lot from her, but still need to refer to guides to confirm some plant name suspicions.

With a well-established garden, I still read magazines and books, as well as attend events like the annual Boston Flower Show, for new ideas and insight on gardening trends.  Two topics have been of special interest to me over the past few years:

1) Saving seeds from year to year;  and

2) Dealing with an invasion of weeds, without resorting to the use of harmful herbicides.

It was though the Nashua Public Library knew of my two special focus areas. In early January,  I was delighted to read about an upcoming seminar about ‘Seeds and Weeds’ FEATURING Roger Swain! It didn’t think twice about signing up and requested two spaces, so I could bring Mom, too.

Nearly 100 Nashua area gardeners schlepped to the Nashua Public Library on a very cold February night for the free seminar. Honestly, it was such a treat to be out, talking with other like-minded people about the hope of spring and gardening in the middle of winter. The timing was perfect since by February 16 we were just starting to notice the days were growing noticeably longer —  darkness had started to set in around 5:30pm instead of 4:30pm,

We arrived at the Library and Swain was already at the front of the room chatting with early arrivals. When the clock struck 7pm, Swain removed his sweater vest to reveal his trademark red suspenders and spent the next hour telling his stories about gardening in New England – with a special emphasis on better understanding weeds and how to control them. 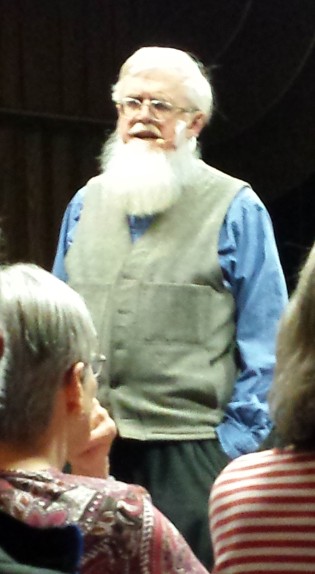 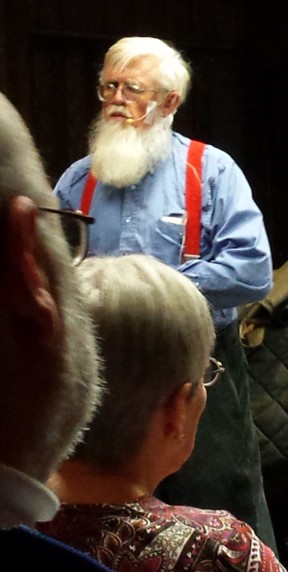 The Truth about Weeds

The big take away for me (and for Mom, too!) included the need to use the right tools for weeding AND being out in the garden, early in the morning to remove newly emerging weeds – not late in the day as I tend to do.  Just for the record, my mom always claimed there are thousands  of very old seeds hiding deep within soil — everywhere. She’s always been against the spring ritual of rototilling. Her argument has been that the process of rototilling results in more weeds and in the end, more work.  Of course, Swain confirmed her theory and once again she’s been right all of these years. Swain suggested long handled hoes that you sweep across the ground (while standing up) to gently pull up newly emerged weeds. Not one to complain about skipping the back-breaking kneeling that I associate with weeding, it looks like the 2017 budget for ‘Preen’ will be spent, instead, on some fancy new hoes this year!

I also appreciated Swain’s comments about organic gardening. He talked about “PMO Gardening” (Pretty Much Organic Gardening).  I feel vindicated with this thought. Over the past decade, I’ve been especially careful of the seeds, plants, and the various soils and composts brought into the garden, especially for the things we eat.  I have a compost tumbler, but the truth is, it takes a few years to get really good quality compost from this gadget I bought over 10 years ago.  Honestly, it’s one of the most disappointing items I’ve ever purchased for the garden – but it’s here and we use. I like the idea of re-purposing things back into use – for example, I’ve started to shred leaves in the fall and use them as mulch in the garden beds vs. buying a hundred bags to have the leaves carried to the landfill (Nashua has a wonderful soft waste curbside collection service, but I’d prefer to let the leaves turn into mulch in my own yard). When I had the limestone steps replaced on my porch with granite, the mason was kind enough to cut the old limestone into squares to use as garden stepping stones, saving a trip to the landfill.  So, from now on, I’ll always remember that as long as I try my best to be a good steward of nature, it’s acceptable to be a “PMO Gardener” and to even sometimes use an herbicide, but only when used sparingly and absolutely necessary. (Thanks for taking away all the guilt, Mr. Swain!)

Once Swain finished his stories, the event transitioned to a Community Seed Swap across the hall from the seminar. The event organizers encouraged gardeners to bring seeds to share with one another.  I took this request seriously and was thrilled to prepare 70 packages for other local gardeners to take home. 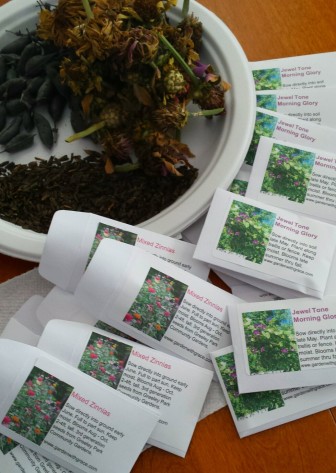 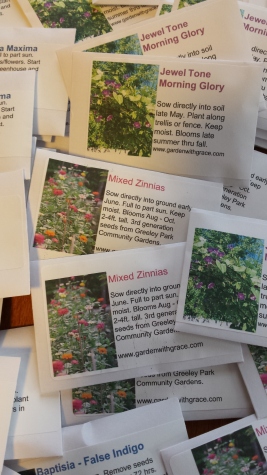 I brought a variety of seeds from perennials and annuals in my own garden including: Zinnias that originally started in the Community Gardens at Greeley Park in Nashua a few years ago; Jewel-toned Morning Glories; Baptisia aka: False Indigo; and Rudbeckia Maxima.

It was a relaxing (and hopeful!) process in early February to separate the seeds and create the packages with photos and information from my own garden.  I even felt well-rewarded when I left the Seed Swap part of the evening’s program. I brought home seeds donated for the event by the High-Mowing Seed Company. I look forward to planting them to grow mixed greens and herbs, as well as some interesting varieties of kale starting in mid-May.

While spring arrived on the calendar yesterday, the view of the garden from my office window  today (where I write this blog) is telling me Mother Nature has not yet received the ‘2017 Change of Seasons Memo’. We still have a thick, crunchy blanket of snow from last week’s Stella Blizzard – but I do see improvement as the St. Francis statue (on the bottom left) was covered with snow up to just under his chin only a few days ago. I’m so glad to have these little packages of seeds to give me hope and ‘Great Expectations’ on a just another late March day. 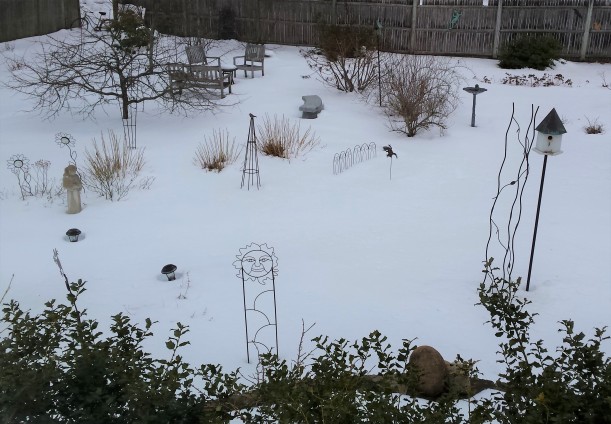 “It was one of those March days when the sun shines hot and the wind blows cold: when it is summer in the light, and winter in the shade.”