One of the first signs of spring in my world is always the fragrance of  newly opened bags of potting soil for seed starting and transplanting. Fellow gardeners know — fresh dirt just smells incredible! It’s a heavenly spring fragrance, especially after a long New England winter.

I have about a dozen large pots for annuals, including flowers, herbs, and vegetables around my garden that I fill with fresh potting soil late each spring – it’s about a $100 investment………….for dirt!

This year, I used different soil mixes in different pots for different plantings. I didn’t intend to conduct an experiment. There was some left over Doctor Earth soil in my potting shed that I used in some of my tomato planters. Then I found some Organic Miracle Grow Moisture Control with coir potting soil at Costco (huge bags – I think 15 qts for $9.99 each.) I used this in my five coleus planters and one of my herb planters. And finally, I got some Coast of Maine potting soil from the Nashua Farmer’s Exchange for my other large herb planter. Coast of Maine products have long been a favorite product in my garden – especially their awesome Lobster Compost.

It’s important that no matter how experienced we are, good gardeners always seek experts to help us to grow our skills and knowledge. Gene and Judy, the owners of the Nashua Farmer’s Exchange, are the experts I count on for good advice.  They have been ‘trusted advisors’ to both my mom and me for many years when it comes to trying new things and finding solutions to garden challenges.

This year, Judy recommended the Stonington Blend  potting soil from Coast of Maine when I stopped in to get the dirt on the best dirt for my large herb containers. Knowing the great quality of the Coast of Maine products, I took Judy’s advice. While the product is a little more expensive than I typically purchase, it was on sale and worth a try.  As I paid for my purchase, Judy whispered to me that the Stonington Blend has a great reputation among medicinal marijuana growers. I found that interesting and kind of funny since I was purchasing POTting soil.

Stonington Blend by Coast of Maine – A New Garden Favorite!

Not realizing that I’d need A LOT of soil for my herb planters, I bought only enough Stonington Blend for one container (which wasn’t an issue – or so I thought! – since I bought those huge bags of the organic Miracle Grow mix from Costco). So, each herb planter used different soil – which set up my unintended gardening experiment this summer.

First, I will share that both planters had the exact same conditions and were set about 10 feet away from each other, with the same amount of sun. The only difference is that one had the Miracle Grow Soil and the other had the Stonington Blend.  The Sweet Basil in both containers is the true testament to the difference – both came from the same batch of seedlings, started at the same time. 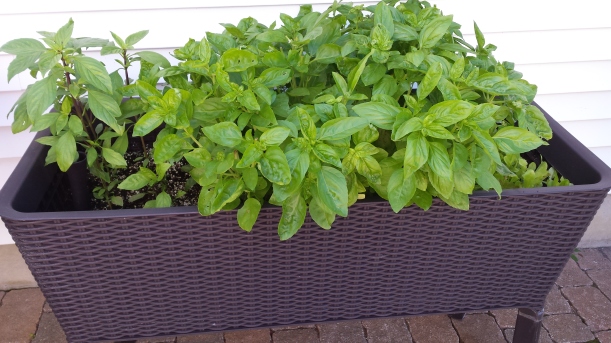 Both of these containers were planted during Memorial Day Weekend of 2017.  And clippings from both containers were taken all summer – however, the quality of the herbs in the Miracle Grow was just terrible this year. I actually took more cuttings from the Stonington Blend container (#2) because it was so much further ahead all summer. Initially, I started the Thai Basil – on the far left of container #2 – in the Miracle Grow container. It didn’t do well, so, I transplanted it to the Stonington Blend container in early August – within three weeks, it quadrupled in size – that was my confirmation that the soil was the big difference between the two containers. (I harvested the Thai Basil last week to make Spicy Tofu Basil for dinner last week. It was so good, I ended up making it twice! That herb is now top of the list to plant again in 2018!)

Here’s the comparison on the day that I harvested Sweet Basil on September 9, 2017.

Both bunches of basil were started together and harvested at the same time. The big, bright bunch on the left was grown in the Stonington Blend. The lighter, smaller leaves were grown in Miracle Grow Organic Moisture Control Mix. Same number of plants in each container.

I visited the Nashua Farmer’s Exchange in mid September to share the results of my unintended experiment with Gene. He gave me a lot of background on the movement of soil producers around the country to create top quality potting mixes for the medicinal marijuana market. From what I gather, the product I used from Coast of Maine is one of, if not the top, potting soil available for this purpose today. For my own use, I’m just awestruck with the results we saw for my herb containers.

My Garden Advisor, Gene, owner of the Nashua Farmer’s Exchange.

Container #2 with the Stonington Blend is still on my back patio – and is absolutely flourishing! The flat-leaf parsley and mints that looked terrible just one month ago in the Miracle Grow container were transplanted to the Stonington Blend – that I mixed up well – on September 2.  Here’s how that planter looked one month later on October 1, 2017 (Before I harvested the Thai Basil):

In the past, this was a week when remaining herbs would be removed and containers cleaned and put away until spring. However, with absolutely no frost or freezes expected in southern New Hampshire for at least two more weeks, these are staying put so I can enjoy the parsley and mint through October.  Halloween Mojitos, anyone?

“There are no gardening mistakes, only experiments.” ~Janet Kilburn Phillips